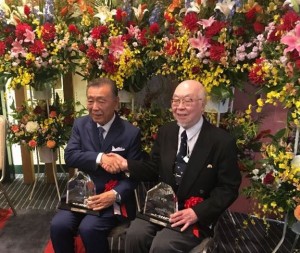 The Miyakawa family traveled to Tokyo, where Hideyuki was successfully placed in the JAHFA Japan Automotive Hall of Fame.

Japan Automotive Hall of Fame (or JAHFA) was established in 2000 in Tokyo, with its headquarters at the National Museum of Nature and Science of Japan. Since 2001, every year, five or six people have been included during the Annual Award Ceremony at the Museum. The Japanese Automotive Hall of Fame informs people of the outstanding achievements of pioneers in the automotive industry and of their successors , with the aim to be inspirational to future generations.

Thanks to his passion for cars and CarDesign world, Hideyuki has stopped in Italy. His love for life then brought him to Val di Cornia in Suvereto, where in this corner of Tuscany, at Bulichella, he established his permanent home and cultivated his interest in Wine. It is news of recent months also the success of the Award-Winning Wine HIDE 2013 (Syrah), dedicated to him. Visit the Awards section for more information.

We warmly congratulate him for such important personal reward!